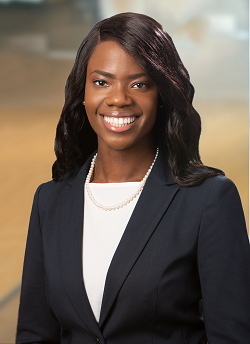 Vanessa is an associate in the Firm’s Litigation Department. Vanessa’s practice includes litigation in federal and state court, particularly disputes involving breach of contract claims, commercial business disputes, and entertainment matters. She speaks fluent Haitian Kreyol. Prior to joining Eisner, LLP, Vanessa completed a judicial clerkship with the Honorable Michael W. Reed of the Maryland Court of Special Appeals. She is a graduate of the University of Maryland Francis King Carey School of Law, where she earned the second highest national score as a competitor on the Mid-Atlantic Thurgood Marshall National Trial Team and was named Best Advocate of the Year in 2016. Vanessa was also an Executive Notes and Comments Editor of the University of Maryland Journal of Health Care Law and Policy and served as a law clerk in the Maryland Office of the Attorney General. In 2020, Vanessa received the Chairman’s Award for Leadership Excellence from the National Bar Association Young Lawyers Division as well as Top 40 Under 40 by the National Black Lawyers in 2021.